Monograph on the 600 mm railway in Selia during WWI 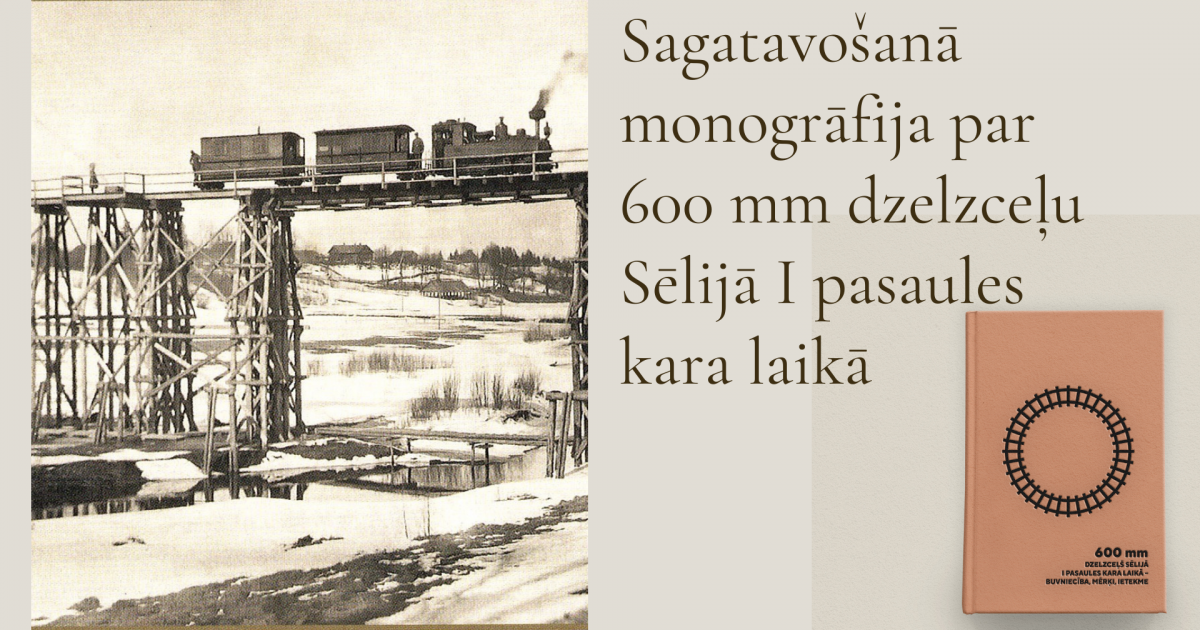 During the First World War, the 600 mm railway in Selija was created by the German army as a military infrastructure for supplying the front, for transporting timber and other economic goods from the occupied territories, in later years it was used as an economic infrastructure by various political regimes, it is located in the territory whose borders were defined for the first time by the Law on Historical Lands of Latvia adopted in 2021, and it equally fits into both the military and industrial heritage as a whole.

Although narrow-gauge railways have been extensively studied in Latvian railway history, the works on the subject deal with rural railways in a rather general way, focusing more on the initial phase of their construction and operation during and immediately after World War I and not sufficiently reflecting how these railways were used in general passenger and freight traffic, especially in the post-1945 period. The 600 mm railway in Selija has so far been dealt with more in small-scale works, often related to local history, or reflected in the memories of contemporaries. It has also remained outside the scope of interest of Western European railway history researchers due to the limited availability and scarcity of sources.

The aim of the research team was therefore not only to investigate the construction process, operational objectives and impact of the Selian 600 mm railway on the development of the region, analysing it as broadly as possible both thematically and chronologically and, in places, within a territorially wide area defined by the nature of the railway as part of the military infrastructure of World War I, but also to obtain as precise information as possible on the natural layout of the railway lines using the Light Detection and Ranging (LiDAR) dataset of ground surface aerial scanning.

The project promotes the preservation of the larger 600 mm railway infrastructure found in nature, bringing it to the attention of the public and enabling local communities to showcase it as a tourist attraction. The work carried out may form the basis for certain elements of the once extensive railway network to be listed as national or local protected monuments and thus protected from destruction, or at least publicly signposted.

The project was funded through the Zemgale 2020 Culture Programme project competition, and the missing funds for the first phase of the project were provided by Viesīte Municipality.In 2021, the Ministry of Defence of the Republic of Lithuania was convinced of the relevance of publishing the monograph and allocated funds for the preparation of the monograph.

Thus, in 2020 and 2021, in the context of the Covid-19 pandemic, the researchers Toms Altbergs (Mg. Eng., industrial heritage expert at VAS "Latvijas dzelzceļš"), Kārlis Dambītis (Dr. hist., historian at the Latvian Museum of Occupation), Aivars Markots (Dr. geol., assistant professor at the University of Latvia) and Ilze Freiberga (Mg. hist, Jelgava, Curator of Expositions and Exhibitions at the Latvian Railway History Museum) carried out all possible research on the narrow-gauge railway built during World War I (construction of lines, sequence, location in nature and on maps, strategic objectives of the German army in the territory under study, economic, social and cultural impact of the narrow-gauge railway in the later years of operation, etc.). The Selian Little Bane was studied in the context of cartography, railway construction, military and socio-economic history. LiDAR data were used to identify the networks. For the cartographic identification of the railway in nature, a GPS database was prepared. For the purposes of the monograph, photographs from the First World War were searched, found and acquired in the collections of museums, libraries, archives and private collectors, and a photographic record of railway infrastructure fragments was made in 2020 and 2021.

We are proud of what we have achieved and are continuing to raise funds for the publication of the monograph.