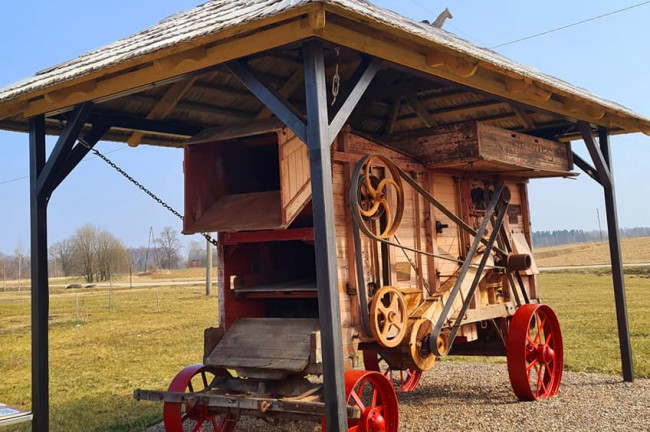 In total, five peculiar monuments of agricultural machinery can be seen on the side of the highway P-108 Saldus - Kuldīga - a steam locomotive of the beginning of the 20th century in Druva, Saldus parish, and a Soviet-era tractor with a ditch digging device at the turn to Namiķi, Lutriņi parish. A tracked tractor and a peat collection machine are located near the village of Lutriņi, which are actually in working order and can be used for earthworks. Opposite the turn to Jaunlutriņi and Šķēde, there is a crawler cable excavator, which is intended for the construction and restoration of trenches, canals, ditches, ponds. An old transportable seed thresher from the beginning of the 20th century, which worked together with the Druva steam locomotive, found a place in Ošenieks, Jaunlutriņi Parish. By looking at the original units, it is possible to learn something new about the technique of the past. Children will especially like it, because here, too, there is an opportunity to climb. It is possible to take photos near the objects, to feel the charm of the past. All units of equipment are located so that they are visible from the Saldus - Kuldiga highway, they can be stopped by car, and they are freely available for viewing by anyone interested at any time. This can make the usual route from Saldus to Kuldiga more interesting.
back